Yes, this is an island which can only be accessed by ferry or plane. We took the Washington State Ferry for a day visit, the weather was great. Once you arrive at Friday Harbor getting to the two sites, the American and English Camps, established from 1853-1872, takes some effort. There are several trolleys or transit companies which make stops at the two sites. The sites are on opposites ends of the island, some miles apart. We chose to rent a car for four hours which allowed us more time at each site and to explore the island. After visiting we did some price comparison and discovered it could have been cheaper to bring our vehicle out to the island. However you get there, visiting both sites is well worth your time.

This site commemorates the Pig War; yep, a pig got shot and the American and British settlers quarreled which led to soldiers from both countries to occupy the island to protect their citizens. No shots were fired, negotiations over 12 years were resolved through a German arbitrator. Each camp is preserved and interesting to visit.

This Junior Ranger program is Senior Friendly, as the only requirement is to

complete the same number of activities as your age. There are 16 activities, so I completed all of them. The activities are; The Pig War, Creating Peace, 1860 Uniforms, Food, Archaeology, Tree Rings, Prairie Restoration, Use Your Senses, BINGO – American And English Camp, Life Zones – American and English Camp, Maze, Create Your Own Emblem, National Park Service, and Junior Ranger Quiz.

What I found most interesting was the diverse environments between the two camps. The American Camp was in a less desirable area of the island, colder and wetter during the winter. The English Camp was better situated at the southern end, with a protective cove. The English-style garden was attractive.

The Archaeology page was interesting, creating a table listing comparable items of Prehistoric, Historic and Modern items. As usual I enjoyed the two BINGO cards, different items to look for at each site. The ecosystem of the American Camp was primarily in the prairie and water life zones, and the British Camp in forests, down to mudflats. Some of the activities help you understand the differences.

I really enjoyed the boat trip to and from the island and exploring the island by visiting the two different camps, especially with the diversity of ecosystems. The history is interesting, but the sights are wonderful. Once I completed the activities a volunteer reviewed my booklet and presented me with a standard badge and attractive patch. 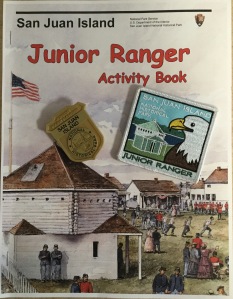 Where Have I Been